President Duterte is not so good in expressing his thoughts straight to the point, I can say that even if I am a staunch supporter of him, it’s kind of like his weakness. Now there was a time he spoke about VP Leni in front of the public and everyone misinterpreted his whole thought from the real idea that he wants to convey — wanting to protect her from the eyes of the others — to the whole idea that he was ogling at her legs and perverting around.

Ever since that instance, I felt like he changed. He started to feel insecure talking about her in public.

Whenever he is composed and the media asks him about her, he strives so hard to pick the right words. I remember observing his gesture of snapping as he try to think of the most precise and accurate word to describe VP Leni and her works. Other than that, when he also describes her (physically and intellectually) as follows:

1. Beautiful – yes, he uses this term to describe her all the time and he never described her as just a pretty or cute or hot or alluring — she is purely beautiful to him. Pay attention to that choice of word.

2. Lady – he calls her a lady. Not just a girl, not just a woman but a lady. You think there is no difference with those? Think again.

3. Motherly – every DDS knows how much President Duterte loved his mom and how he is a mama’s boy. He just don’t call anyone motherly but then he did it with Leni Robredo. How about that?

Those are just a few. But then of course, I’d also like to point out when President Duterte talks about VP Leni when he’s emotionally hyped or whenever he’s mad.

Incompetent. That’s what he said about her. It’s an insulting word to call someone who’s working hard to meet the expectations of the people looking up to her. What did he do days after? What did he say when he stopped being all mad and careless? Retracted it and changed the words to a less offensive one.

There you go. His refined words that carries a message to her: “I know you’re smart, don’t get me wrong but I need you to be as wise as I want you to be because we’re in politics.” He is rooting for her too. Though in my opinion he could still say that thought in a nicer way but then that’s him, at least he tried. 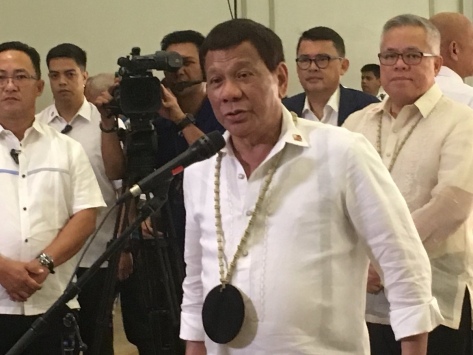 But then thinking of it, why did you think he had to detail it out and make it sound less offensive? Why does he need to give a shit if it offends her or not when he is just telling his opinions and thoughts?

Because he cares for her.

I’m quite sure he knows how hard she is working and how she is trying to maximize her resources but he saw what she lacks and he wants her to work on that but then again just by saying she’s “incompetent” sounds SO BAD. Just so bad.

Saying “You’re incompetent.” is just the same as “You lack more knowledge in this aspect so you better work on that.” but saying the second one is better right?

If not all I watch about 90% of VP Leni’s interviews, guesting and talks, that’s where I noticed how she enjoys talking about President Duterte. I’d like to defend it now, I don’t think she is faking this trait to look aware and concern, I think this is something that comes out of her naturally (aside from the fact that it’s really nice and entertaining to talk about a sketchy interesting person like Rodrigo Duterte).

She likes expressing herself by words, noticing how much she enjoys posting on facebook and social media and all. Whenever the topic becomes the president, it’s inevitable not to see the hype and change of engagement level in her. I think she enjoys having him as a topic because she get to express how she understand and sees him and his works and mind, this is something she can’t explain or just talk about on one of her agriculture, anti-poverty, empowerment and other business I mean come on, do you really think it’s cool to tell what you think of your colleagues at your public and formal speeches? No. That’s why I understand why she seem to get hyped when she gets the opportunity to talk about him.

Alongside the statements and words of how she interprets and understands him, she also don’t forget to bring up the things she don’t agree with — related to him and his decisions. She’s not the typical public servant who praise and act like they care about the president, sucking up, kissing ass probably for advancement or endorsement, Leni Robredo speaks from the heart.

She can tell you how much she is amuse of the president but at the same time, she’ll tell you what she disagrees with.

But one thing I noticed, when she’s talking about him at a well known or established platform, she starts to be careful too. One example is when she had an interview on ONE News when they’re talking about the time he said she was incompetent.

— VP Leni on ONE NEWS

She is stuttering, she is swiftly retracting, she is being the extremely careful not to make him sound so bad to the audience. Why is that? Why does she need to be wary of her words? So what if the audience misinterprets it and find President Duterte so bad? Why does she need to deliver his statement in a clear way like that instead of saying it just as is regardless if it sounds so bad or not?

Because she cares about him too.

That’s not for a show but because she really do. Not that she just cares but with this, I see how she also understands him. She didn’t take his statement just as is, she fathomed into it and try to find the reason why he said it and that is something.

When one tells you you’re incompetent, it’s so easy to take it just as is and come back at them with “Go to hell.” But it takes a lot to stop for a whole and think about why they said that and take it in with a come back of “Okay, I get it. I’ll be better and be more competent.” To take a statement like that as an encouragement rather than a pure insult is A LOT, really. Leni Robredo just did that. Just wow. (Though I think she got carried away too after reading the press statement she released earlier before her interview on ONE News but prolly that’s just her initial reaction.)

When President Duterte and VP Leni talks about each other

President Duterte sometimes talks about VP Leni on a personal level whenever he’s too intoxicated with his emotions and mood that sometimes he may seem to sound offensive or irrational and I also notice that. It makes me understand why his critics point that out but that’s him.

Just like how VP Leni described him, he is authentic, he talks what he thinks — no holds barred and people liked that in him.

I’m just glad VP Leni understands that character of the president and that she compromises to it. I’m sure the president compromise to her as well at other aspects — if not with the way they talk about each other.

I’ll always root for their harmony, anyways, they are seated there for us. Even if sometimes they act so messy individually or together, we don’t have much choice.

I hope they continue to work things out and communicate well. They need it plus I don’t think it’s that hard. God knows kung gaano kadaldal itong dalawang taong ‘to, may they use their kadaldalan to keep their communication good and their works at bay. 😋