“Duterte does not always know the right words to say and that is why he often needs an interpreter, an explainer.”

—Patmei Ruivivar, Duterte’s Chief of Staff in Davao for 7 Years

This is something that you should understand. Filipino isn’t Duterte’s first language but bisaya, the language commonly used in Davao. He once admitted this in one of his speeches, hirap siyang mag-Filipino. As a matter of fact he actually speaks English better than Filipino. This is also the reason why he always gets misinterpreted and taken out of context.

Kung mapapansin niyo when he speaks minsan parang bitin or putol and he doesn’t even bother to continue it anymore because he thinks nagets na ng nakikinig kahit minsan mahirap talaga maintindihan.

If you would also pay attention to most of his speeches, he always share stories. Minsan paulit ulit yung mga kwento niya na parang wala namang point or connect sa issue but then if you would listen closely, you’ll understand why he’s talking about it.

One example is when he shared about his thoughts about his vice president, Leni Robredo, wearing short skirts when she was still a member of the cabinet. Sabi niya binubulungan siya ng mga kaibigan niya sa cabinet, specifically Dominguez, “tignan mo yung tuhod ni (Leni).”

Kung traditional ka, ang initial understanding mo sa pagkukwento niyang yon is naninilip siya kay Leni Robredo. Is that what he really meant? Did he share that story to tell the people to brag about the fact that he had a chance to ogle on his VP’s knees or legs? No.

Let’s move further sa speech niyang yon. He followed it by sharing that she noticed that they are distracted by the length of her skirt, she started to pull it down.

Of course, some might interpret it like he’s feasting over the fact that she’s wearing a short skirt and he’s being a pervert but what he really wanted was to let her know that he doesn’t like it when she wears short skirts, he doesn’t like it when the protocol officers and the eyes of the people feasts over her body, he was just being protective. He also said on another speech that VP Leni is a respectable woman, she’s someone he finds very ladylike, a lady with a Mona Lisa smile. She’s not just some eye candy, she was a lady he respects and values and he is just being this protective man to his vice president, he might just be having troubles in finding the right way to do it.

Tacloban Leyte is one of Bongbong Marcos’ bailiwick and the fact that he is present on that event at the same time with VP Leni, siya ang magmumukang bida but President Duterte didn’t let that happen. He made a way to make him and VP Leni a highlight dimming Bongbong Marcos and whatever tension is gonna happen between him and Leni.

“Kung saan siya (Leni) naga-punta nagapasunod sunod ako. Byuda kase, anulled man ako. (video link)” I believe this is something he’s been wanting to tell her he just don’t know how and when and when he had the chance during that time, he did. He proudly professed in front of the crowd of her rival’s bailiwick. It’s also surprising that the people there were blushing and cheering for Duterte and Robredo, it only shows that there are really a lot of people rooting for them as well. Sinong bida ngayon? Kahit balwarte yan ni Bongbong Marcos, si Leni Robredo and naging bida dito and that’s all because of Duterte’s efforts. 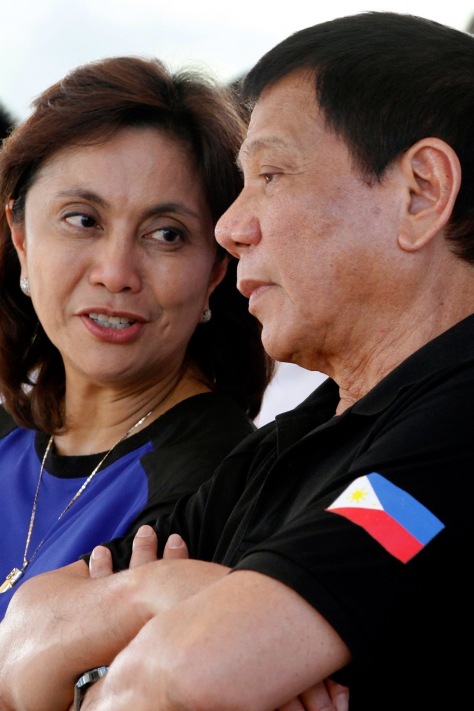 Let me also point out that Romualdez (BBM’s cousin) and BBM himself were seen blushing and smiling as Duterte professes his admiration for his vice president. Even the most serious people like Jun Evasco, Bong Go, Mark Villar, Gina Lopez and Judy Taguiwalo were giggling and blushing over Dubredo. Who’s winning here? Leni.

That’s not the only time that the president front lined and praised his vice president. He jested about looking at beautiful women when he’s mad in order to ease off his anger then he paused and turned back to look at VP Leni Robredo, “Malaman niyo ‘pag ako galit, sige lang ako magtingin ng magagandang babae. (video link)“. Cristina Romualdez was there, Yedda Kittilsvedt was there, Gina Lopez was there but he only looked at VP Leni and referred her as the only beautiful lady he’d like to see to calm him down when he’s mad. Everyone cheered, it didn’t even feel like it was BBM’s bailiwick, Dubredo overshadowed it — Duterte and Robredo together is that powerful.

Stay Here Beside Me

It was a protocol for President Duterte to walk ahead of everyone during the commencement but it was seen in the video that the president keeps looking back and holding VP Leni’s arm to keep her on his side and keep her from being left behind. She even blushed when he stopped walking and turned to wait for her to catch up. He didn’t want her to feel left out so he made an effort and defied the protocols for her. 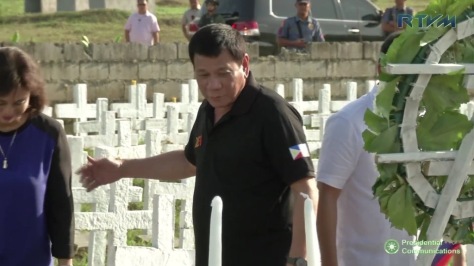 The president also assisted her in lighting up the candles. He was very accommodating to her all throughout the event despite that former senator Bongbong Marcos was there. There was also an instance when VP Leni said it was fine if she’ll walk behind him as it is the protocol but President Duterte insisted that they walk side by side, it was seen that VP Leni appreciated his gestures.

This part of this post is somehow subjective and is based on my analyzation of President Duterte’s persona but I hope you keep reading.

Duterte is a very confident, independent man. He’s not the kind of man who would run after a person, he can stand on his own but who would have thought that someone like Leni Robredo can make this man feel insecure or jealous?

During his speech in Tacloban, he mentioned about hearing rumors about Leni having a boyfriend (video link). He asked her for confirmation live but the vice president denied and said these rumors are false, he believed her. After then he jested, “Eh kung totoo yon ma’am may mapatay na congressman na bago.” Despite that he didn’t actually mean it, you could feel his insecurity and jealousy over that unnamed person. Possessive pala ang pangulo, gusto niya sakanya lang tinutukso ang very beautiful vice president niya.

President Duterte makes women come and go in his life, he once said he doesn’t want to exert effort for women now especially that he is not getting any younger but despite these jealousy that the rumors about VP Leni gives him, he still chose to keep admiring her. It’s silly and fascinating at the same time, I don’t blame him because she’s really beautiful and knowing President Duterte, he really has a thing for ladies ages 30+ and up, very ladylike, kind and reserved — he always describe her this way, it’s something unusual because he tend to describe the women he’s attracted to in a physical manner like delicious and sexy — Leni Robredo was different, she was precious to him, she’s always at the top of his mind, she was his lady with a Mona Lisa smile, he once said.

If only VP Leni Robredo knows how much President Duterte values her, she would know to herself how powerful she is because she can make a Rodrigo Duterte listen and turn not just because he is fond of her but also because they share the same goal — leading this country for the better.